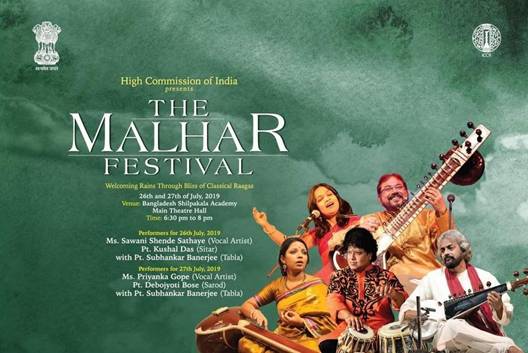 High Commission of India, Dhaka will be organizing the ‘Malhar Festival’ on 26 & 27 July, 2019 at the Main Theatre Hall, Bangladesh Shilpakala Academy, Dhaka at 6.30 PM. Eminent artists from India - Smt. Sawani Shende Sathaye, Pt.  Debojyoti Bose, Pt. Subhankar Banerjee and Pt. Kushal Das along with Ms. Priyanka Gope from Bangladesh will be performing during the event

Smt. Sawani Shende, born in a musically rich family was introduced to Indian Classical Music at the age of 6 by her grandmother. Later, she received training in Music under the guidance of Dr. Smt. Veena Sahasrabuddhe, a noted classical vocalist from Gwalior Gharana. She has received many prestigious awards like ‘Sangeet Natak Academy’ Ustad Bismillah Kha Yuva Puraskar’, ‘Tara Award for the World Album ‘Beyond Love Within’, “Pandit Jasraj Gaurav Puraskar” ‘Vishwa Sangeet Ratna Award’ ‘IRAA Award for the Best Artist’. She has released several albums and has performed in different concerts in India and abroad.

Pt. Kushal Das started his Sitar training at the age of 5 under the guidance of his uncle and father. Later, he received training in advanced sitar techniques under Pt. Sanjoy Banerjee. He had the privilege to receive training under Late Pt. Ajoy Sinha Roy, Late Pt. Manas Chakraborty & Late Pt. Ramkrishna Basu. He has been a well regarded musician for All India Radio & Television.  He has participated in many concerts & festivals in India and abroad. He has released several CD’s.

Pt.  Debojyoti Bose hailing from a musical family, learned Sarod at a very young age from his mother and later received advanced training under Ustad Amjad Ali Khan. He has received awards such as ‘Kal ke Kalakar’, ‘Anandalok Award’, ‘Sangeet Samman’, ‘Sangeet Maha Samman’ etc. He has performed in many cities in India and abroad such as in USA, UK, Australia, Russia, China and many more. He has performed in several TV shows and composed for many films.

Pt. Subhankar Banerjee started his training at the age of 4 from Benaras Gharana under Pt. Manik Das and later from Pt. Swapan Shiva of Farukhabad gharana. He has accompanied many great artists like Pt. Ravi Shankar, Ustad Amjad Ali Khan, Pt. Hariprasad Chaurasia, Pt. Shivkumar Sharma, Pt. Birju Maharaj, Pt. Jasraj. Apart from his very noted performances across the globe, his performances during the Noble Peace Prize Concert, Festival of India in Brazil, Asian Fantasy Concert in Japan & performance in London with the Symphony Orchestra were highly rated.

Ms. Priyanka Gope is an ICCR Scholar and completed her MA from the Department of Music, Rabindra Bharati University, Kolkata. She has trained under maestros and is presently learning under Pandit Arun Bhaduri and Pandit Urmi Dasgupta. She has won several national and international awards such as Gold Medal in Nazrul Sangeet in the National Education Week, 2001. She is an enlisted “A Grade” artist of Bangladesh Betar & has a lot of music albums in her credit.

All are cordially invited. Entry is open to all and strictly on first come first serve basis.